According to Etherscan data, OpenSea has been unloading thousands of ETH on the market in the last few weeks. Similarly, NFT creators on the platform have profited, according to the statistics. The volume of NFT trading on OpenSea continues to climb in January.

Since the start of 2022, OpenSea, the largest NFT marketplace, has seen extraordinary NFT sales. According to Dune Analytics, monthly NFT sales on OpenSea currently exceed $4.5 billion. This sum surpasses their previous monthly sales record of $3.5 billion and is expected to rise further.

The volume of Ethereum exiting has steadily climbed over the last two weeks. 21,000 Ethereum were directly transferred from OpenSea’s wallet to Coinbase.

As the selling of NFTs increases, so do royalties and direct transfers from OpenSea. The precipitous rise of the NFT marketplace may enhance Ethereum inflows to exchanges such as Coinbase.

As royalties from OpenSea, an extra 35,300 Ethereum were distributed to NFT issuers. Colin Wu, a Chinese journalist and crypto analyst, argues that the surge of Ethereum inflows from OpenSea to Coinbase spurred the increase in selling pressure.

Analysts have noticed that the net outflow for Ethereum in 2021 was relatively large. The net inflow of Ethereum has increased significantly during the last month. 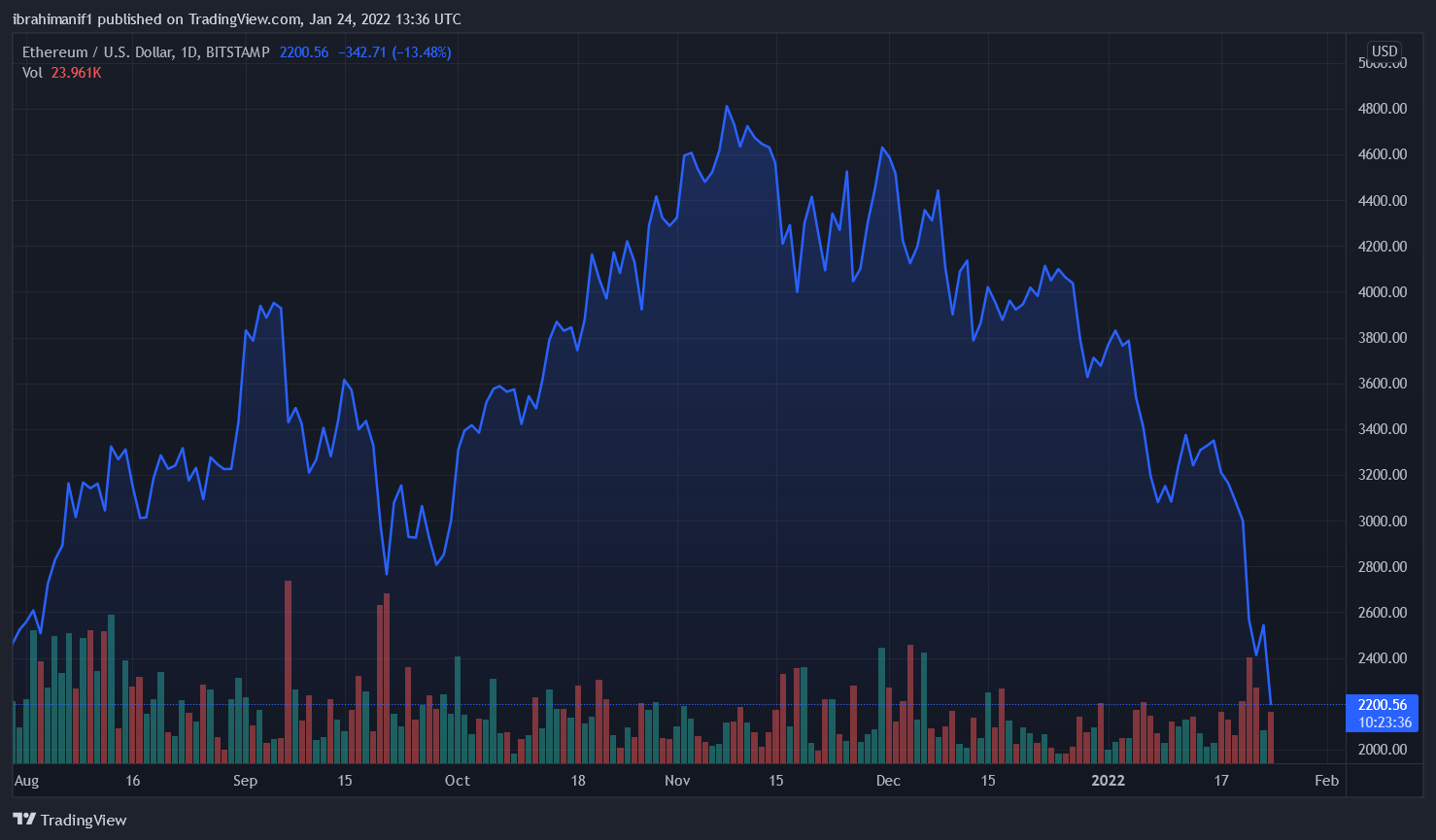 IAmCryptoWolf, a pseudonymous cryptocurrency analyst, assessed the Ethereum price trend and forecasted that a bounce in the altcoin’s price around $2,300 would act as strong barrier.

$ETH.
Working on 78.6fib, monthly 21EMA and horizontal daily and weekly support 2.2-2.3k.
Since we lost 3k key support, a bounce in this area will act as strong resistance. In the same area we will also have daily DMA50 curving down together with the WMA50 and WEMA21 resistances pic.twitter.com/ngR2YsCzqC 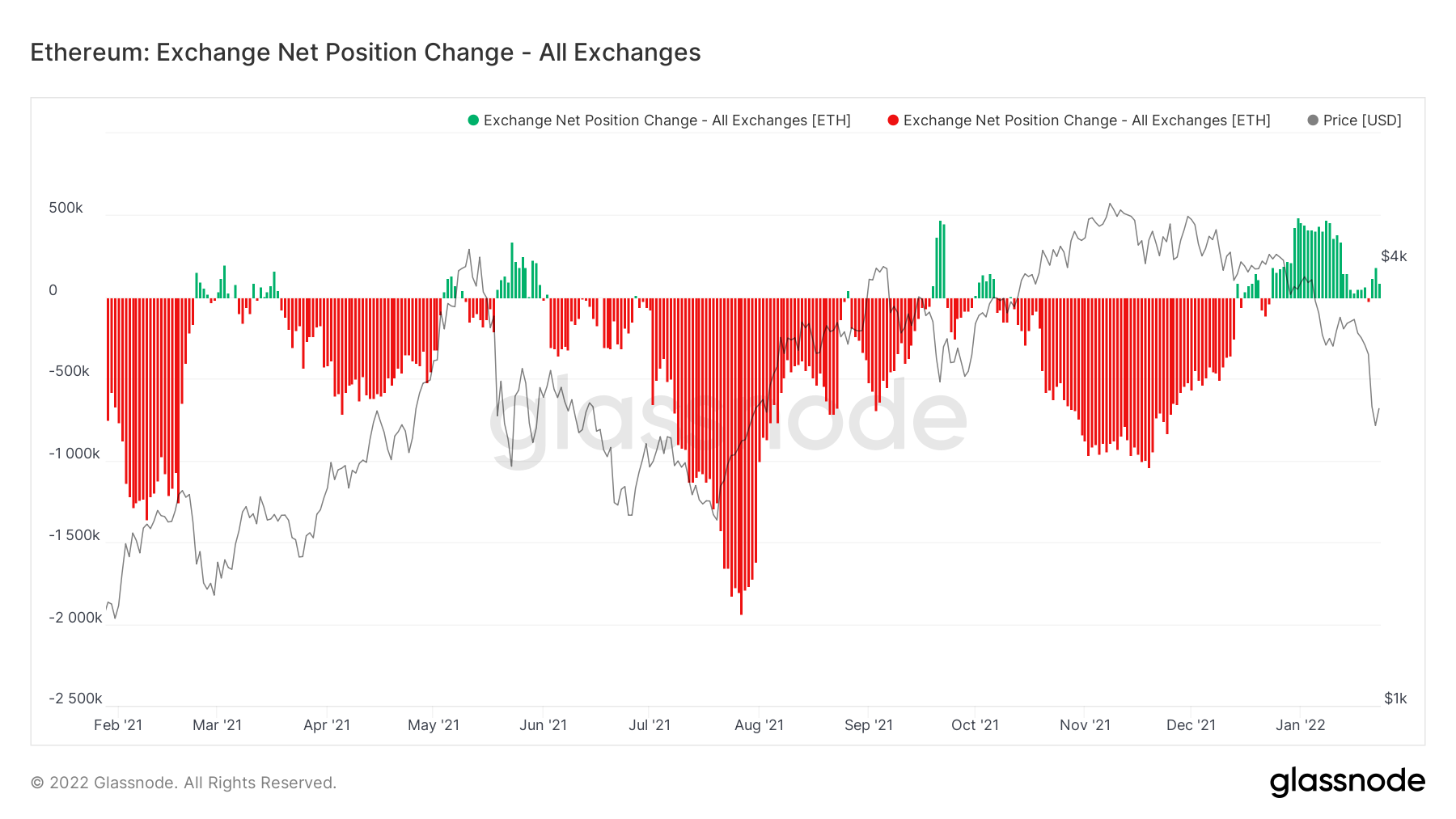 However, OpenSea is not the sole cause of the drop in the price of ETH. According to Coinmarketcap data, ether is down more than 35% year to date. Over $746 has been deducted from the value of ETH in the previous 14 days, as it has fallen below $3,000. ETH is presently trading at $2,407, a -3.71% decrease over the previous 24 hours.

Other Factors That May Trigger Price Fall

Several reasons have contributed to the crypto market crisis, including a broad market selloff in response to a policy shift by the US Federal Reserve Bank. The changing policy direction of Russia toward crypto is among the contributing factors to consider.

Market participants, on the other hand, remain bullish on Ether in the long run. Several upgrades that the network intends to roll out this year are fueling these expectations. For starters, the next stage of Ethereum’s journey to becoming a proof-of-stake (PoS) blockchain is planned for this year. Several forecasts claim that the merger will take place in the first half of 2022. This improvement will increase the Ethereum network’s scalability and greatly contribute to making Ether issuance deflationary.

As a result, it will encourage adoption and, in the long run, drive up the price of Ethereum.

Ahead of Ethereum’s highly anticipated switch to proof-of-stake (PoS), cyber security firm Cloudflare is set to launch and fully stake...

According to data from Staking Rewards, Terra (LUNA) has flipped Ethereum (ETH) in terms of staked value, with $29.5 billion...

A hacking group that infiltrated Nvidia servers last month is attempting to sell software that could unlock crypto mining hash...